The lovely north Mallorcan town of Pollensa dates back to the thirteenth century when it was founded. The town itself is a popular place for holidaymakers wanting to see the ‘real Majorca’ as well as for a place to buy property.

And little wonder as Pollensa (sometimes known as Pollenca) nestles peacefully amidst stunning countryside in the shadow of the magnificent Tramuntana mountain range.

In fact the ‘Serra de Tramantuna’ is such a splendid sightseeing experience that it has been chosen as a UNESCO World Heritage Site.

Plenty to see in Pollensa

Standing a few kilometres from the town’s port, Puerto Pollensa, and Mediterranean Sea (originally sited so as to protect the inhabitants from attack my marauding pirates), Pollensa has history, architecture and culture in bucket loads.

In actual fact, one of Mallorca’s most splendid festivals takes place here every August, the Fiesta de Mare de Déu dels Àngels, which attracts visitors from all over the world. 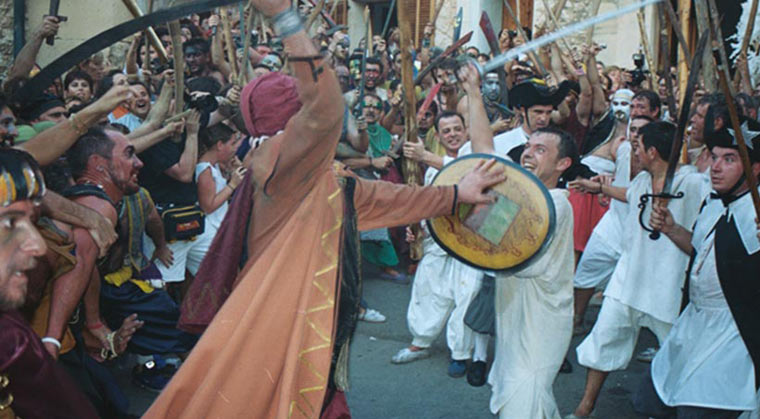 Back in 1550 the infamous Turkish pirate, Dragut, very nearly overwhelmed the town. One Juan Mas, cried out to Our Lady for help and the city was saved.

The locals have never forgotten it! So important is it ingrained on the town’s collective memory, that each year the Fiesta de Mare de Déu dels Àngels celebrates the victory with enthusiastic, staged street battles followed by much partying enjoyed by crowds of spectators. 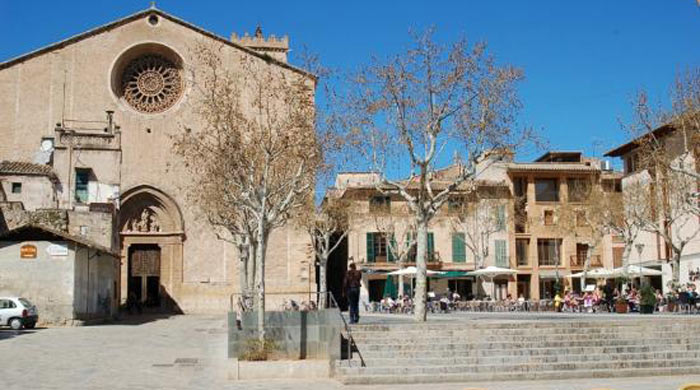 On a visit to Pollensa, one cannot fail to enjoy Pollensa’s splendid main square, Placa Major. It really is the town’s beating heart full of pretty cafes in which to laze away the afternoon, along with some very fine restaurants and hotels.

The town’s weekly Sunday morning market takes place here and is one of the best in the whole of Mallorca.

Nobody does churches quite like Mallorca, and the Nostra Senyora dels Àngels, is no exception. Overlooking the Placa Major, the imposing church looks like it is carved out of a sheer rock face of Mallorcan stone. Its centrepiece is the ancient rose window.

The church was originally built in the thirteenth century and remodelled in the Baroque style about five hundred years later. Inside you’ll find a huge, towering altarpiece as well as imposing wall and ceiling paintings. 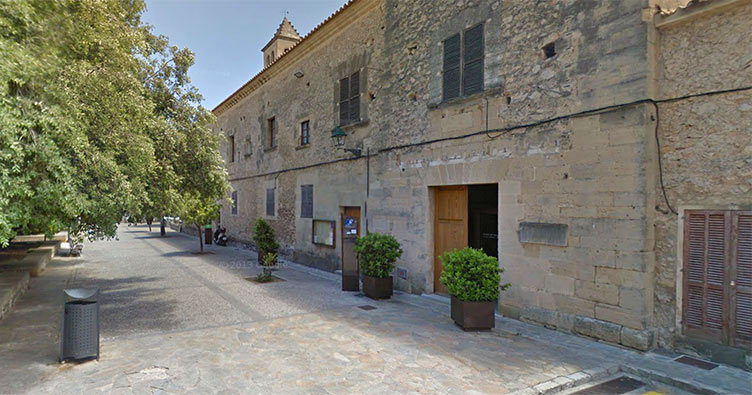 As you can imagine, with so much rich history behind it, Pollensa has its fair share of museums.

The Museu de Pollenca, set in a former monastery, is perhaps the most popular. Here you’ll find a collection of interesting contemporary paintings, video art and photography, as well as some local archeological discoveries.

In the ex-monastery’s cloisters there is a memorial to Philip Newman, a Mancunian violinist who founded the town’s main Festival de Pollenca back in the early 1960s!

The Museu Marti Vicenc is much smaller in size but no less interesting. Set in an old beamed Pollensa house, it celebrates the striking textiles created by famous local weaver Marti Vicenc who died in 1995.

There is also a delightful textile shop selling Mallorcan fabrics and the textiles of Teixits Vicens. 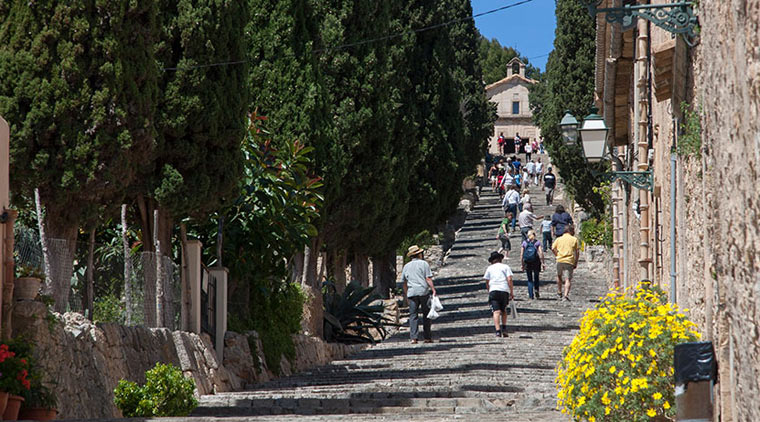 The ‘Puig de Calvari’ is perhaps Pollensa’s most famous attraction. It comprises a rather beautiful steep stone stairway leading up to a pretty courtyard featuring a thirteenth century religious statue, the ‘Mother of God at the Foot of the Cross’.

It’s well worth the climb too, as the elevated views over Pollensa’s old town, the Tramuntana Mountains, and the sparkling blue Mediterranean are to die for!

Add to this the annual Pollensa Wine Fair held in the stunning cloisters of the Convent de Santo Domingo and you’ll soon realise that Pollensa is certainly one of the best places to see (and be seen in!) in the whole of Mallorca.