The name ‘ Ibiza’ originally comes from the Arabic word ‘Yabisah’, meaning Land (or the Landward) and ‘Eivissa’ is the official Catalan pronunciation of the name. However, ‘Ibiza’ is the Spanish name, pronounced with the Castilian variation, and it is this name that has been adopted by most.

Ibiza is very famous for its summer parties held throughout the summer when thousands of pleasure-seeking clubbers find themselves among the masses in the super clubs and on the beaches.  The most well known night clubs in Ibiza include Pacha, Space, Amnesia, Privilege, Es Paradis and Eden.  These clubs regularly host equally as famous parties such as Manumission and Cream.   Ibiza is considered to be a rite of passage for most partygoers who tend to flock to the West End Party district in Sant Antoni.

Ibiza’s history dates back to 654 BC when the Phoenician settlement established a port on the island and named it Ibossim.  It was during the time of the Phoenicians that the visiting Greeks nicknamed the island Islas Pitiusas, referring to the abundance of pine trees on both Ibiza and Formentera.  Then with the invasion of the Assyrians, the Phoenician reign came to an end and passed under the rule of Carthage, also a Phoenician colony. Ibiza became a leading producer of dye, fish sauce or garum, salt and wool.

After 400 BC, Ibiza was transformed into a major trading port owing to its position on the Mediterranean trade route. In 209 BC, during the Second Punic War, the island of Ibiza was invaded by the Scipio brothers and the island is now famous for the remains of the Punic settlements.  This was followed by a short rule under the Roman Empire, (who renamed it Ebusus), the Vandal rule and then the Byzantine rule until it was conquered by the Moors. Finally, in 1235, the island passed under the rule of Catalan King Jamie I of Aragon and in the 18th century, Ibiza was announced a democracy and is now a part of the Balearic Autonomous Community.

The Island of Ibiza is also famous for its natural beauty.  It boasts large numbers of  magnificent caves and pristine beaches.   Our pick of the best begins with Aguas Blancas, a tiny beach with rocky cliffs and shallow inviting waters, providing a great haven or swimmers and nudists.  Benirras is one for those seeking a little more activity as it offers great snorkelling in the calm waters and hiking in the nearby hills.  Explore the rocky caves of Cala Bassa, (excursions to here begin in Sant Antonio), and enjoy it’s pristine white sandy beach lined by shady pine trees.  And make sure you visit Pou Des Lleo, a very serene and peaceful cove that provides you with the opportunity for a little exploration before hitting the beach for that all important R&R! 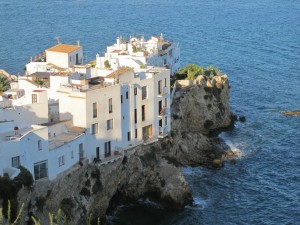 The historical Ibiza Old Town is another hot spot for tourists.  Founded by the Phoenicians in the 7th Century BC it boasts UNESCO World Heritage site, (The Puig de Molins Necropolis) a lively waterfront nightlife and the imposing Dalt Vila.  Best viewed from down at the harbour it sits perched above the labyrinth of cobbled streets and allies leading up to it.

At the most southerly tip of the Island of Ibiza is Ses Salines Natural Park.  Its natural salt pans provide a safe shelter to over 200 species of birds and other exotic flora and fauna and this Natural Park also provides the visitor with spectacular and colourful sunset vistas.

Explore away from the coastline and you’ll find hidden secrets such as the village of Santa Agnes de Corona, the wine cellars of Sant Mateu d’Aubarca and the archaeological site of Ses Torres d’en Lluc.

See which ferries go to Ibiza from Mallorca or the mainland.